Hmmm, read the original lyrics yourselves and notice which have been changed.
Also have a look at who first penned the poem. 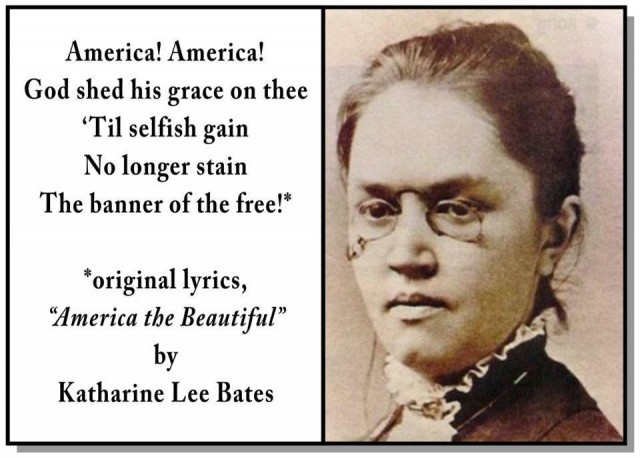 What coud have been in her head as she drafted the original poem?
And how did the ones who edited it get away with slipping “gold & success” into the lyrics to replace the text about “selfish gain”? And then there’s a contrast wherein  “whiter jubilee” was replaced with “brotherhood”? Hmmmm?
Throught-provoking, no?

America. A Poem for July 4.

I am a Franco-american woman who hails from Massachusetts. I live in France near the Swiss border, only minutes away from Geneva. I am a Social Entrepreneur in the making, a Gospel singer, Actrice, Stand-up Comic & member of an Improvisational Theater troupe. I am also gravitating towards writing a book or two, a couple of plays and a one-woman show.
View all posts by emanita01 →
This entry was posted in Poetry, Women & Wisdom and tagged America, brotherhood, gold, Katharine Lee Bates, lesbian. Bookmark the permalink.